6.5 Creed Specialty Pistol
EuroOptic had these Rem 700 SA non-designated barreled actions on sale months ago for a killer price. I was looking for an inexpensive set-up for a loaner specialty pistol for my WY-SHOT folks that was easy to purchase ammo for, and was not a 223 Remington.
Hence, a 6.5 Creed with a 1-8 Twist, Sendero Taper.
Jim Rockwell made the laminated rear-grip stock.
Chris Rhodes/Bayside Custom Gunworks did the stock work, bedding, and also chopped the barrel, recrown, single-shot follower, and put on a Harrel Tactical solid-bottomed brake. I had an extra trigger on hand.
The barrel was dirty as expected from Remington.
Shot it for the first time last week after bore sighting on a pd mound, and went to killing dogs, and steel. Recoil was nothing.
I was curious to the MV, and how it would group on paper. Chris put me on to the Hornady American Gunner 6.5 Creed ammo (140 BTHP Match), and it shoots great in every 6.5 Creed I have shot so far...and it didn't disappoint this time either.
Sunday afternoon I went over to Dan's house, and got it zeroed at 100 yards. We were shooting a number of SP's getting zeroed, chronoing, and slipping the dials, until wind and rain shut us down. 1/4 MOA or less from looking the spotting scope. I will take it. Plan to confirm some drops later this week.
Muzzle velocity is 2476 fps.
A Big Thanks To Chris for putting everything together and to Jim for the stock.
This is one of the Loaner SP's for WY-SHOT! 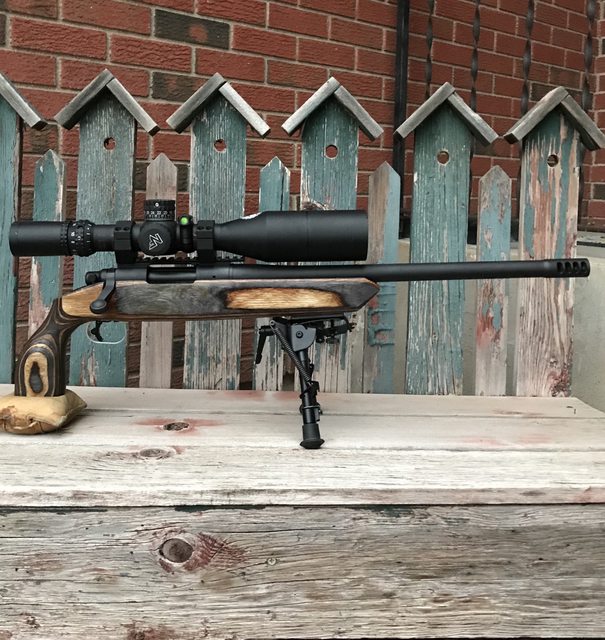 "I have tried to live my life so that my family would love me and my friends respect me. The others can do whatever the h-ell they please. --John Wayne
buckskin is offline
Quote Quick Reply
post #3 of 4 (permalink) Old 06-23-2020, 12:49 PM
Mindcrime
Junior Member

Quote:
Originally Posted by Mindcrime View Post
Ernie, you have too many REALLY COOL TOYS. &#x1f601;
I am very spoiled
Ernie
"If you think you are perfect, just try walking on water!"
xphunter is offline
Quote Quick Reply