I shoot mostly short shells anymore. Pollywad vinitger 2 & 1/2 shells RST makes some too. I mostly shoot vintage guns. But the shells you guys are talking about is not low pressure.
Byron

Christian by choice, American by the grace of God.

Whatever they are, the slugs don't seem to loose a great deal of power..what..1300 fps vs 1600 fps? Either would be enough for most big game.

BTW - Does anyone remember hearing of a 12 gauge repeater some company was supposed to come out with way back when the Aguila shorty shells first hit the market? This would have been probably 15 or more years ago now. I distinctly remember reading a test in one of the gun rags on what I believe was a pre-production model that was specifically designed for the shorty shells (only). Can't remember if it was a semi or a pump. Only that it was foreign made and the manufacturer may have been affiliated with Aguila in some way.

I'm pretty sure it never made it into regular production. Just a big splash in one or two magazine tests and then it disappeared.

I find it interesting how there was a good amount of hoopla back when the shorty shells were introduced, but interest in them just as quickly died out and for many years they have been available, but very little was heard about them. Now there seems to be a resurgence in interest in them, reflected by Federal introducing some.
Are you talking about the imported MAG-7 shotguns from South Africa? I remember seeing them advertised for a bit and then nothing. 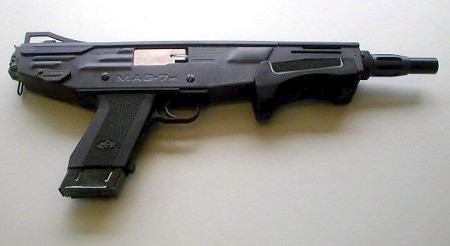 Those aren't the ones I was thinking of.

The one I remember looked like a regular pump/semi shotgun with the action length scaled down for the short shells.
spruce is offline
Quote Quick Reply
post #15 of 16 (permalink) Old 06-12-2019, 05:31 PM
iiiranger
Junior Member

Long ago, the rich had the peasants do whatever they wanted them to do. In the lore of hunting in the British Isles, even pictures on occasion, the rich man will have two or even three "bearers/loaders" for his 2 or 3 double shotguns. [Mel Brooks did a movie about France where the "nobles" were shooting "peasants..." Mighty trap to throw a person... Of course the peasant was honored to be chosen as a target...] The beaters drive the birds out of cover and they fly and the rick sob shoots two, hands the gun off, takes another gun and shoots two more and hands that one off, meanwhile the servant has reloaded... In this environment it was determined that a great lot of power was not needed for smaller birds and lighter guns with shorter shells were plenty... I could go on indeterminable but the bottom line is the rich sob's were showing off to each other by having 5 or 10 or 15 of everything. No doubt they had a 10 gauge if needed or could get one quick... Or summon a naval vessel with grape shot. ..money talks. I recall when the Browning "double automatic" came out in dark blue receiver/"navy" for the men AND in Kelly green --this was anodized aluminum; and in pink--for the "girlfriends". I was talking to a collector and "double automatics" came up and he said he had never seen "pink." That must be the ones that are, many years later, light brown.../ tan. And the world continues to turn. As suggested, if they feed reliably, 6 or 8 light loads in an indoor shotgun, much less likely to go next door and hurt the neighbors, but a real "grinder" on a local target... not a bad idea. Like the belled muzzles of the early shotguns. Happy trails.
iiiranger is offline
Quote Quick Reply
post #16 of 16 (permalink) Old 10-16-2019, 06:13 AM
Darkgael
Senior Member

There is a rubber plug made by Opsol that installs in pump shotguns and allows for reliable cycling of the minishells.
https://opsolmini-clip.com/product/o...clip-2-0-flex/

Quote:
. Like the belled muzzles of the early shotguns
Belled muzzles, as in a blunderbuss, were an aid for rapid reloading on a moving platform like a stagecoach or the deck of a ship. The bell has no effect on the pattern.
NRA Life Member
NRA Certified Range Safety Officer.
Before you get into a discussion:
https://thebestschools.org/magazine/...noratioelenchi
Last edited by Darkgael; 10-17-2019 at 05:35 AM.
Darkgael is offline
Quote Quick Reply