Joined Sep 21, 2007
·
5,061 Posts
Yes, correct. One new fact I got yesterday was confirmation that, of the three companies of the “Richmond Howitzers” only 1st Company, the one whose Artillery may have included 10 Pounder Parrott Rifle No. 10, buried its guns near Red Oak Church.
J

Joined May 13, 2014
·
147 Posts
I am sure most here applaud the research and identification of the history of this gun as it served both sides, and the brave men who served it.
However, some people take a very different view of history, and prefer to rewrite or erase as much history as they can. Thus the Richmond Howitzers are seen by some not as a historical event, but as some sort of evil threat, and anything commemorating them must be destroyed.

As exciting as the histor of gun number 10 is, it may be best to keep knowledge of it relatively low key, lest it too become a target. Here is what the mob has done to the Richmond Howitzer Monument in Richmond two years ago. 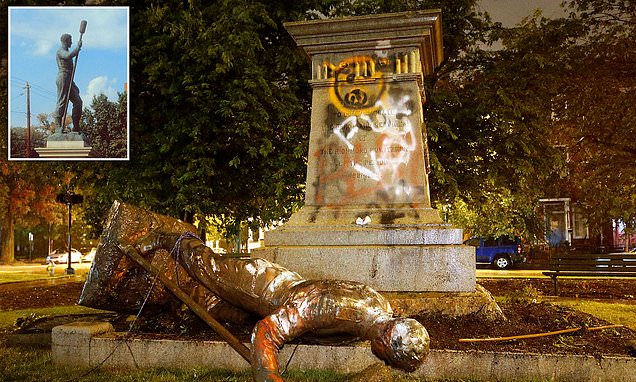 Protesters tear down another Confederate monument in Virginia

That being said, be careful, politics is off limits here on this board unless it directly relates to black powder mortars and cannons.
S

Joined Jul 4, 2009
·
392 Posts
FWIW, the Broadway Landing pictures show a couple small banded guns just lying in the dirt as well as a few other ersatz transportation methods. The larger piece in the center has a tree trunk lashed in place of one wheel to act as a skid.

Joined Sep 21, 2007
·
5,061 Posts
Thought I was nearly done with this but today went back over it, checking my work, and found some mistakes or points needing confirmation. One important point is the composition of 1st Co., Richmond Howitzers battery when they disbanded. I was thinking it was Napoleons and Parrotts but some references mention Napoleons and ordnance rifles after a rearming. One error was working too fast and mistaking a fictional account for real Events,

The Burial of the Guns

Joined Sep 21, 2007
·
5,061 Posts
So it may be time to declare victory, do an article, and move on! I’m not hugely disappointed that figuring out which Confederate battery used No. 10 hasn’t happened yet. I’m not convinced that another 100 hours of research would get me much closer to learning which Confederate battery used this gun after the Bull Run-captured Parrott rifles were distributed. But of course I’ll revisit the case occasionally, or now that I’ve advertised the project here and there, someone may come up with helpful documentation. I’ve only been through a fraction of the Confederate records that may be useful. There are tons of potentially-useful documents that are beyond my reach now, such as manuscript collections held by numerous educational institutions. I have listed several batteries known or suspected to have received one or more Bull Run-captured 10-pounder Parrott rifles, and I’m fairly certain, given further evidence, that one of these will prove to have been the Confederate owner of No. 10.
C

Joined Sep 21, 2007
·
5,061 Posts
I’ve had a couple of very knowledgeable “cannon people” tell me the only place I’m likely to find the detailed info I’m seeking is files of or about individual officers. Fold 3 is such a source. I’ve never used it before but it looks like I’m going to start. The officers to research would be the commanders of batteries in the units I’ve listed previously.
C

Joined Sep 21, 2007
·
5,061 Posts
Finding lots of interesting info in the Fold3 files of the various artillery officers. Most of that interesting info doesnt help much to connect no. 10 to a particular unit, but some tends to eliminate a unit here and there. I’ll post some items. Here’s one dated Oct 21, 1863 at Brandy Station, where Major James Reilly turns over all battery ordnance to CAPT. James Ramsay. There were three 10 pounder Parrotts. Interestingly the list also includes six pendulum houses sights and two brackets for same. I didn’t see any breech aka tangent sights.

Joined Sep 21, 2007
·
5,061 Posts
I’ll post photos of the vent. I’ve seen other Parrott rifles, various calibers, and the top of the vent and area right around it are even and flat. The vent of no. 10 is hemispherical at the top. Theres a ”mound” of iron you can see. Why is that? Only thing I could think of was that it had been bouched with an iron vent-bouching aka “grain.” And not all of the square top end, which fits in the big tap wrench used to screw the grain in, had been removed. The present vent hole diameter is 0.275 in. A new vent is 0.200. John Morris has shared 2 photos with you!
C

Joined Sep 21, 2007
·
5,061 Posts
This photo shows the breech area of no. 10. There’s no evidence that a pendulum hausse sight bracket was ever installed; otherwise there would be two threaded screw holes. I don’t have any info that suggests Parrott rifles ever used pendulum hausse sights. Prior to 10 pounder registry no. 4, only the tall front sight was present, so the range-adjustable hand-held breech sight was needed. No. 34 and after had a sight-mounting ring on the right breech face, and a vertically-sliding sight post was installed when firing.
C

Joined Sep 21, 2007
·
5,061 Posts
The research continues. One complicating factor is of course the fact that artillery batteries‘ armament changed at times for many different reasons. We can find documentation describing some of these changes but I’m guessing there are at least an equal number of changes which may have been recorded at the time, but the paperwork didn’t survive. Here’s one example of such documentation with my explanatory notes in yellow.

Joined Sep 21, 2007
·
5,061 Posts
I’ve spent a day looking into the location of No. 10 from when it was donated by the War Department in 1874, until it was sold by the cemetery at an unknown date but probably ca. 1990. Here’s the report of legislation covering the donation.
C

Joined Sep 21, 2007
·
5,061 Posts
Here’s the late Wayne E. Stark’s data sheet filled out when he visited the IOOF cemetery in Tamaqua, PA to record the markings on the four 10-pounder Parrotts there, my recent notes in green. Form copy courtesy of Jim Bender, the present registrar of Civil War artillery.

Joined Sep 21, 2007
·
5,061 Posts
Here are some pix of the Soldier’s Circle in the IOOF cemetery in Tamaqua, PA, and the replica Parrott rifles put there to replace the sold originals. John Morris has shared 3 photos with you!
C

Joined Sep 21, 2007
·
5,061 Posts
I’ll paste in this bit on “missing” 10 pounder Parrott registry no. 3. When last seen in 1960’s it’s foundry number was noted. The muzzle and it’s markings were missing but the records tell us it is no. 3. I’m inserting this seemingly unrelated bit because it tells us no. 3 might be the ONE 10-pounder of the first 10 made, that wasn't captured at Bull Run, because here it is, still in Union hands, at 2nd. Manassas.
C

Joined Sep 21, 2007
·
5,061 Posts
I asked some more knowledgeable folks about what style of sights Parrott put on their 10 pounders. This changed during the production run. The breechface socket for sliding vertical rear sight started with No. 35, but some guns after that still had only muzzle sights and some had both, up as late as #80. Guns with registry numbers 1-34 had a tall front sight on the muzzle. The rear sight was a tall breech sight with curved base to match basering curvature. The gunner would adjust it for range then see it on the basering so the center mark was on the high point of the basering. I haven’t yet heard that pendulum hausse sights were used on Parrott 10-pounders.
C

cannonmn said:
I’ll post photos of the vent. I’ve seen other Parrott rifles, various calibers, and the top of the vent and area right around it are even and flat. The vent of no. 10 is hemispherical at the top. Theres a ”mound” of iron you can see. Why is that? Only thing I could think of was that it had been bouched with an iron vent-bouching aka “grain.” And not all of the square top end, which fits in the big tap wrench used to screw the grain in, had been removed. The present vent hole diameter is 0.275 in. A new vent is 0.200. John Morris has shared 2 photos with you!
Click to expand...

Here’s a photo of the vent on No. 23, owned by a friend. You can clearly see the outline of the grain, aka bouch, under the paint. It is a wrought-copper, threaded vent bouch or grain. Another friend owns Parrott 10 pounder no. 26?; he reports it has a copper grain In the vent.

Reilly’s Battery, aka Rowan Artillery, came to Manassas just after Bull Run and received two 10-pounder Parrotts among other captured guns. So Rowan is one we know for sure.

Another sure thing is the 1st Rockbridge Artillery, known to have received two Parrott ten pounders captured at Bull Run.

Steve then gave me lists of all officers associated with each of those units, and I pulled up all of the reports in Fold3 for each officer. Some officers had 175 reports on file and some had 3. The vast malority of the reports (I call them reports) are requisitions on various forms the Confederates used. Some of the req forms were for forage, an officer’s pay, clothing, provisions, etc.

I hoped the requisitions for ordnance and ordnance stores would be useful as indications of when Parrott 10 pounders arrived in a given unit, so I copied every one.
41 - 60 of 64 Posts
About this Discussion
63 Replies
4 Participants
Last post:
cannonmn 7 h ago
Graybeard Outdoors
A forum community dedicated to the great outdoors and hunting enthusiasts. Come join the discussion about hunting, fishing, survival, archery gunsmithing, optics, reviews, accessories, classifieds, and more!
Full Forum Listing
Explore Our Forums
H&R Centerfire Rifles Round The 'Ole Pot-Bellied Stove Blackpowder Mortar & Cannon by Seacoast Artillery Hand Loading Rifles & Handguns by Diamond K Brass Bolt Action Rifles Sponsored by Camera Land
Recommended Communities