Joined Jun 30, 2015
·
923 Posts
I entered and won an auction for a Schrade D'holder custom knife. I only had 2 days to learn all I could about these somewhat rare knives made in the Schrade custom shop with the blades having been designed by renowned knife maker D'alton Holder. Best I can figure from my research on these ~20yr old knives, they planned on making 5 knives, one in each year from 2000 to 2004 to commemorate Schrade's 100yr anniversary. Now the rest of the details. From what I've "learned" each of the five knives were to be made in a run of 500 knives, each serial numbered, with certificate of authenticity and custom padded case. They also supposedly made overruns of them to cover and warranty issues, etc., and up to 1,000 of each was made. The overrun knives were not serialized, nor carry the etched D'holder under the etched Schrade on the blade, but were made by the exact same people.

Now, the confusing part. Schrade closed it USA production and sold the company name in 2004 before all 5 knives were produced. Some knives were put together with extra blades they had made, but not by the custom shop (supposedly). My research shows that the SD04 was designed with a howling wolf bronze embellishment on the left side bolster. I've read that these knives are not numbered and not actual custom shop Schrade builds.

The SD03 has a bronze elk embellishment (by Bruce Dawson) on the left bolster and I surmise that all were made in the custom shop, both numbered knives (500) and overruns (500?). The knife I have purchased seems to be one of these SD03s, but no serial number was mentioned, nor was mention made of the certificate or special case. At the price I paid in auction I was quite accepting of the idea that it was an overrun knife, but was produced in the custom shop before Schrade closed operations in the USA.

If there are any serious Schrade collectors here that are willing to give their opinion on this particular knife, I'm all ears and will appreciate any information, good or bad. As I said, I'd be fine knowing it is in fact an overrun knife made by the custom shop at the price I paid for it. Thanks.

This is a link to another SD03 for sale, giving a good bit of information on the Schrade/D'holder knives: 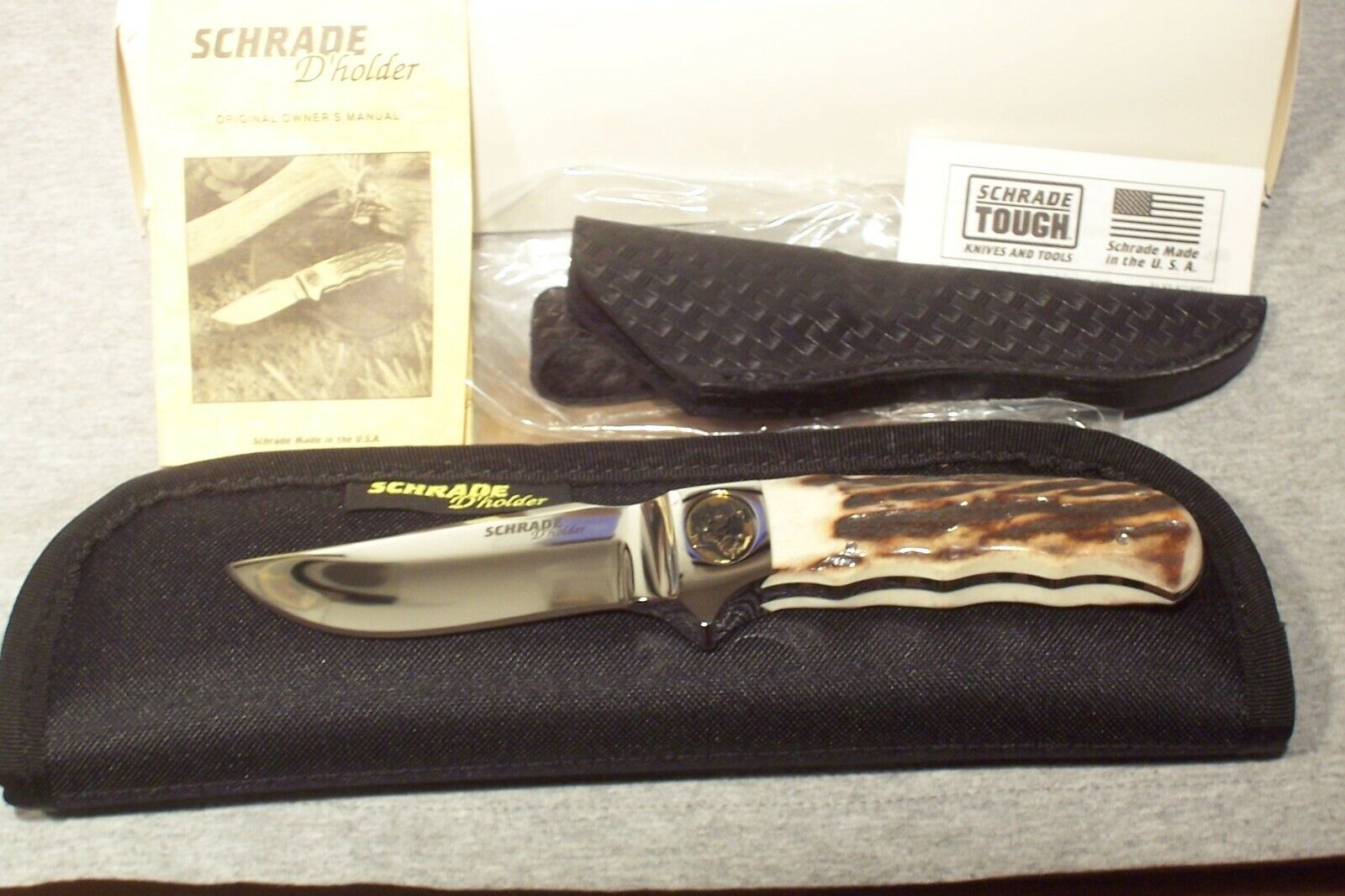 This is the knife I purchased:

Joined Mar 18, 2012
·
26 Posts
I'm certainly no Schrade expert and in fact quit paying any attention to them when production went offshore.
But, Sorry , everything about that knife screams knockoff to me. At least knockoff from D'Holder stuff, it may be legitimately newly made by Schrade again.
Compared to older stuff the grind and polish of the blade looks wrong. The font of the Schrade marking looks new. The fit of the handle scale has a gap and the use of water buffalo material spell Asian assembly to me. The sheath seems to be made of thin leather and the basket weave looks embossed with an unfinished edge and poor stitching.
I can't see in the picture very well but I believe the originals had a tapered tang that this knife does not.
Again, Sorry for the blunt appraisal.

Joined Jun 30, 2015
·
923 Posts
The knife does have a tapered tang. And I've seen other Schrade customs with exactly the same sheath. I doubt very much is a new knock-off and I saw a LOT of Schrade D'holders trying to figure if it was a numbered one or overrun knife. Everybody has their own opinions. I saw the knife referenced and it is the same 03 year build design.

BTW, those were pics from the ad as I just received the knife yesterday.

Joined 9 mo ago
·
75 Posts
Hi,
A LOT of knives from Schrade, are now coming from CHINA.

One of my EDC knives are a Chinese Schrade Folder and is a good knife for the money, I paid.

Does have Chinese blade steel though!

Note blade profile to your knife!