As violence continues to gut cities across the nation, increasingly the question is – who is behind all of this?[…]


POLITICS, UNITED STATES OF COMMON SENSE
Follow the Money – Who’s Paying to Destroy America?
by Charles "Sam" Faddis September 2, 2020
As violence continues to gut cities across the nation, increasingly the question is – who is behind all of this? Who is organizing and instigating clearly coordinated efforts at tearing this country apart and destroying the existing social, political, and economic system?
As the old adage holds – follow the money.
Refuse Fascism is a front organization for the Revolutionary Communist Party of the United States. Refuse Fascism functions as an umbrella organization supporting Antifa actions all across America.

Refuse Fascism is funded at least in part by an organization called the Alliance for Global Justice. This group is based in Tucson, Arizona. It was founded in 1998.

The Alliance for Global Justice has received funding from a wide range of organizations. This includes the Tides Foundation. The Tides Foundation functions as a sort of legal cutout for groups wishing to donate to leftist causes but attempting to hide their support. The Tides Foundation is generally credited with having pioneered anonymous “Dark Money” transactions for politically liberal and progressive organizations in the areas of the environment, health care, labor issues, immigrant rights, gay rights, women’s rights, and activism against gun rights, industrial development, and corporations. “Structural racism” is a common theme in many Tides Foundation projects as is the concept of “white privilege.”

One of the Tides Foundation’s projects is the Apollo Alliance, formed under the umbrella of something called the BlueGreen Alliance. This initiative promotes a radical clean energy revolution whose tenets bear an uncanny resemblance to Ocasio-Cortez’s Green New Deal.

The Alliance for Global Justice also receives money from among others:
The Alliance for Global Justice originated in an organization called the Nicaragua Network – a group dedicated to supporting the Marxist Sandinista regime in Nicaragua. It was created by the Nicaragua Network to take charge of actions focused on areas outside of Nicaragua itself. Katherine Hoyt and Chuck Kaufman are founding co-chairs of the Alliance.
Hoyt is married to a Nicaraguan citizen and was involved in the Sandinista efforts to overthrow the government of Nicaragua and establish a socialist state there. Hoyt has openly spoken of allowing her home in Nicaragua to be used by Sandinista guerillas and stockpiling Molotov cocktails there.
Kaufman has a long history of involvement with Communist organizations. He was one of the founders of a group called A.N.S.W.E.R. – a group focused on ending U.S. “threats” against North Korea, Iran, Venezuela, and Cuba and an end to the “colonial-style occupation in Palestine and in Haiti.”


In short, the mobs tearing apart our cities are not spontaneously organizing or self-funding. They are the visible manifestation of what is an almost unbelievably vast network of foundations and front organizations that have been growing inside this nation under our noses for decades. These groups are, by and large, overtly hostile to the United States of America as it currently exists. They have long since made common cause with some of our most dangerous enemies, and they consider you and me the enemy.
What these groups want is not reform. They use phrases like “black lives matter” and “justice” in a deliberate effort to make themselves less threatening and to lull the population as a whole to sleep. This is intentional and a time-honored tradition amongst radical leftist organizations.

What is intended is something much more radical. It is, as one leftist speaker recently put it, the “abolition” of the United States as we know it and its complete replacement with a Marxist state.
Follow the money – that will tell you everything you need to know.
Of note, Refuse Fascism was one of the organizers of the D.C. march on the White House on 27 August where a number of prominent Republicans were harassed and intimidated leaving the White House. It has been reported that a group affiliated with Clinton aides also organized for the 27 August protests – the Party Majority PAC. Refuse Fascism is one of the primary organizers of the “Trump/Pence Out Now” protests and plans for nationwide protests and demonstrations on 5 September 2020. Their struggle to upend our nation is never-ending.
L

#Whistleblower #PortlandProtest Breaking: According to this
@DHSgov
internal email, obtained
@CBSNews
, former Acting Under Secretary for Intelligence & Analysis Brian Murphy wrote colleagues on July 25th that the Portland violence was not “opportunistic” but “organized” citing 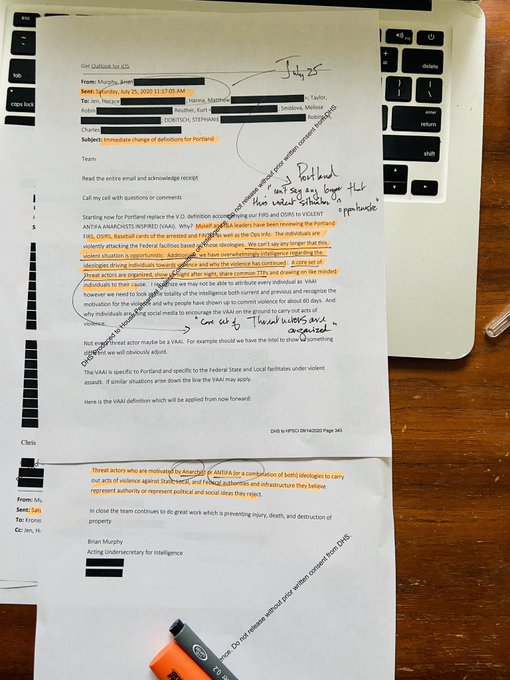 “Anarchists or Antifa” READ: “We can't say any longer that this violent situation is opportunistic. Additionally, we have overwhelmingly(sic) intelligence regarding the ideologies driving individuals toward violence + why the violence has continued. A core set of Threat actors

are organized and show up night after night, and share common TTPs (Tactics, Techniques and Procedures)..” "Threat actors who are motivated by Anarchists or ANTIFA (or a combination of both) ideologies to carry out acts of violence against State, Local and Federal authorities..”