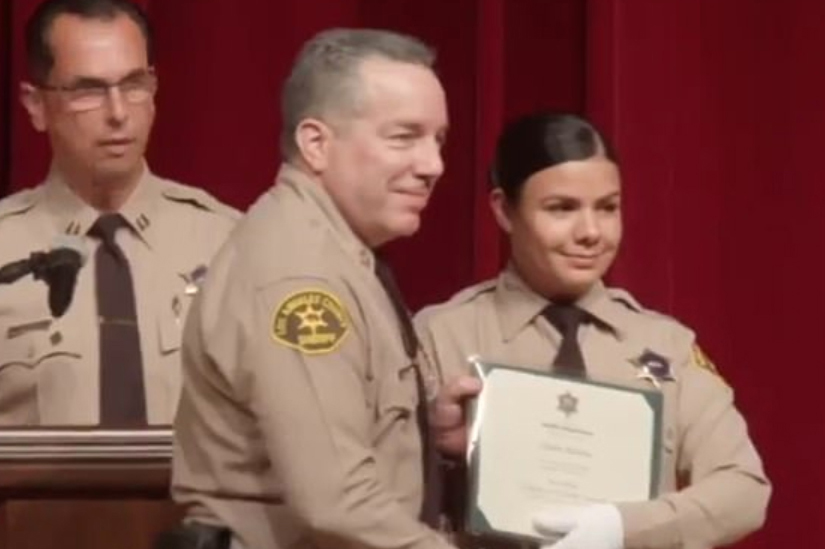 The heroic Los Angeles County deputy who survived an ambush and saved the life of her partner is reportedly a 31-year-old former librarian who just graduated the academy last year. Claudia Apo…

The heroic Los Angeles County deputy who survived an ambush and saved the life of her partner is reportedly a 31-year-old former librarian who just graduated the academy last year.
Claudia Apolinar, who was struck in the jaw during Saturday’s shooting, was in stable condition at a Los Angeles County hospital, according to the Daily Mail.
She could be seen in video of a graduation ceremony posted online from 2019. The outlet spoke with the deputy’s father, Adolfo, who was with her at the hospital.
The deputy and her partner were both shot at close range while sitting inside their patrol car in a chilling caught-on-video ambush. Apolinar made a tourniquet for her 24-year-old partner before medics arrived.
Enlarge ImageClaudia ApolinarLos Angeles County Sheriff's Dept
“By the grace of God they’re both going to pull through. They’re obviously pretty injured and it’s going to be life-altering but they’re in stable condition,” Lt. Brandon Dean, the lead investigating officer, told the Daily Mail.

“It’s an extreme situation. She was shot in the face, shot in the upper torso several times. To have the wherewithal to get yourself out of the vehicle and the line of fire in case it continues, but then to take care of your partner, initiate radio traffic make sure the civilians in the area are safe, it shows a lot about her courage and intestinal fortitude.”
LA Sheriff Alex Villanueva said both deputies are out of surgery and are expected to survive in what he called “a double miracle.”
The sheriff’s department is offering a $175,000 reward for information leading to the conviction of the unknown gunman.
FILED UNDER LOS ANGELES , POLICE , POLICE HEROES , 9/15/20
1 - 1 of 1 Posts
Join the discussion
Continue with Facebook
Continue with Google
or sign up with email
About this Discussion
0 Replies
1 Participant
Last post:
tdoyka 11 d ago
Graybeard Outdoors
A forum community dedicated to the great outdoors and hunting enthusiasts. Come join the discussion about hunting, fishing, survival, archery gunsmithing, optics, reviews, accessories, classifieds, and more!
Full Forum Listing
Explore Our Forums
H&R Centerfire Rifles Round The 'Ole Pot-Bellied Stove Political Issues Discussion Blackpowder Mortar & Cannon by Seacoast Artillery Hand Loading Rifles & Handguns by Diamond K Brass
Recommended Communities